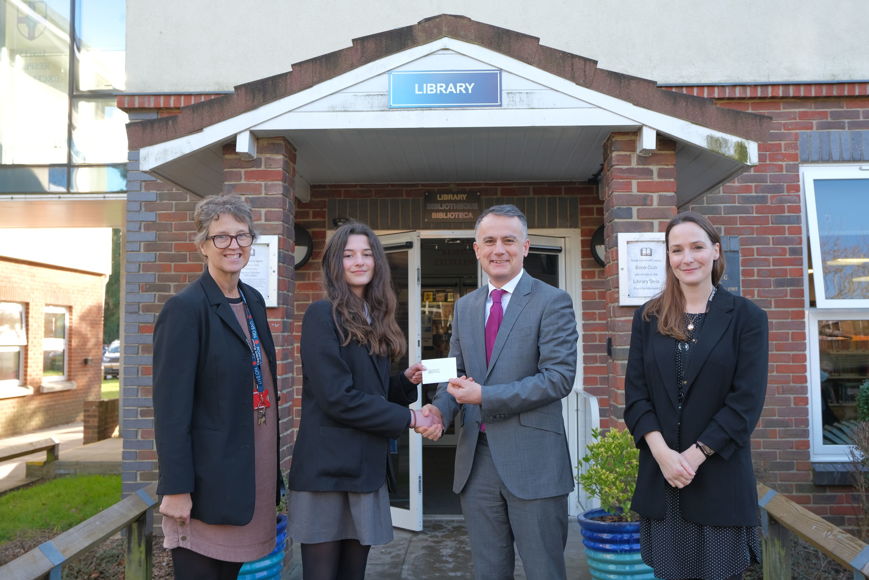 Lottie beat off stiff competition to win the 11 - 14 age category which was judged by writer, broadcaster and animal lover Clare Balding. Clare said that Lottie's poem was "A great story told with good use of language and rhyme. I like the race happening by accident and the detail of getting saddled but most of all I love the twist that Rudolph is judged and jeered but then provides light in the dark. It feels like a moral tale of embracing difference. Very clever.”

In addition to providing Lottie's prize, Ascot Racecourse also donated a £200 Waterstones book voucher to the school. Librarian & Library Manager Mrs Olding, said, 'It is so wonderful that Lottie's achievement will allow us to develop the verse collection in the Library, creating a greater opportunity to foster a similar love of poetry in other students at the school.'

Lottie's festive poem is below:

WHEN RUDLOPH BECAME A RACEHORSE

Rudolph the reindeer and his shiny nose,

Stopped during his work, just for a quick doze.

(he had been working all day, without pay!)

But upon opening his eyes he could find no sleigh!

He searched frantically around looking for deer

But no antlers, no elves around here.

A short man in bright colours took hold of his head.

“Mmmm, you seem a little different” he quietly said.

But with a shrug of this shoulders often done by the elves,

He retrieved a bridle from one of the shelves.

He began to tack up Rudolph, pulling too tightly,

Then sat upon him, positioning himself lightly.

Rudolph was in shock as he trotted around,

He paced back and forth, hooves striking the ground.

“Hoe did I end up here?” he thought

Then from outside the room, he heard a loud snort.

Emerging outside, he had to blink twice,

He gazed in awe at the fresh green course,

Then settled his eyes on a fine graceful horse.

The audience gave side looks as Rudolph emerged,

But still his excitement could not be purged.

Him, a Reindeer, at Ascot Races?

The jockey led the reindeer up to the stalls,

Amid the racegoers excited calls.

And as the starter’s orders finally came,

He raced ahead hoping to win his fame.

But something was wrong, Rudolph was last,

As the racehorses were just too fast.

Rudolph hung his had in shame,

As the crowd jeered and pointed in blame.

All the loud music came to a stop.

The screens went off, the lights went out

And the laughing crowd began to pout.

People were frantic “please help me” they cried,

But they couldn’t see, no matter how they tried.

The out of nowhere came something that glows,

Rudolph the reindeer with his bright red nose.