My flying experience with cadets

On Friday I was given the opportunity to go flying with my air cadets squadron. Due to Covid it is the first time in four years that any cadet has been offered this chance. The plane I flew was a Grob tutor, this is used for training and air experience flights. I was lucky enough to be flying out of RAF Benson in north Oxfordshire, and the conditions were perfect. 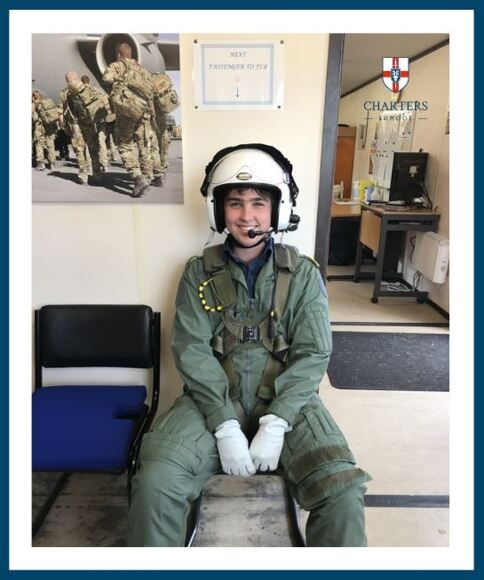 The pilot and I took off at about 15:00 for a 45 minute flight. To begin with I followed through on the take-off - I held the second stick in the aircraft, and followed the motions the pilot was doing to take-off. When we were in the air the fun began! We started by getting me familiar with the controls and movement of the aircraft. Once we had done that, we did some rolls and flew upside down for a minute or so. After seeing the pilot go through these motions with the plane, it was my turn. I successfully rolled us left and right and flew us upside down briefly. Now we moved on to loops. The pilot explained how to do them then went straight into a practical demonstration. After holding my breakfast down better than some of the other cadets, it was my turn. I pulled the stick back hard and we went shooting up into the sky and then back around on ourselves. I thoroughly enjoyed doing this, so I did a few more! Now we get into the more complicated stunts. Next was the barrel roll, this was a combination of a roll whilst doing a loop in the air. We launched straight into this one and my stomach nearly emptied after the demonstration. After a quick explanation it was my turn. I only did two of these as they were quite difficult. Now we do the most advanced trick, the stall turn. For this the aim was to shoot straight up into the air until the engine stalled, then we would drop out of the sky and fall for a few moments before the pilot would restart the engine, recovering us, and regaining control. I grew more and more nervous the higher we got until I heard the worrying splutter of the engine stalling - my stomach dropped, and so did the aircraft. We were falling for what felt like an eternity before I heard the reassuring rumble of the engine coming back to life. Now, as you may have guessed, it was my turn. I was fairly worried about doing this but after a few words of encouragement I pulled back on the stick and propelled us straight up into the sky. Then, just as before, the engine spluttered and stopped. We hung in the air for what felt like forever before we dropped. Somehow, I safely recovered us, and we came out of the fall smoothly and safely. I couldn’t believe that I had just piloted an aircraft to do that, and I think I still am in disbelief! Sadly, after this our time in the air was up so I piloted us back to the runway where the pilot took back over again and landed us safely.

This was an incredible experience and I would urge anyone else given the opportunity to take it, you won’t regret it!